History of the Buildings 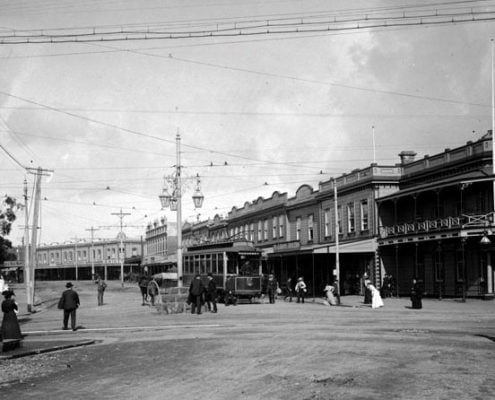 Looking from St Mary’s Bay Road towards Ponsonby Road showing the three lamps at the intersection of College Hill (left), Ponsonby Road (centre), Jervois Road (right) and St Mary’s Bay Road, the public toilets adjacent to the Post Office (left) a tram, the Ponsonby Club Hotel, W and G Adams, Grocers, the corner of Pompallier Terrace and unidentified Grill and Tea Rooms. A real estate sign with map of sections in Tole Estate about to be auctioned is to the left on the corner of College Hill and Ponsonby Road. 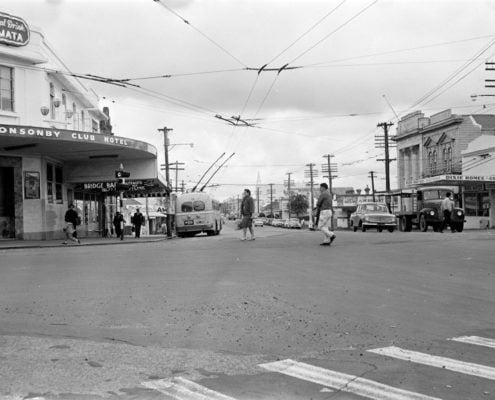 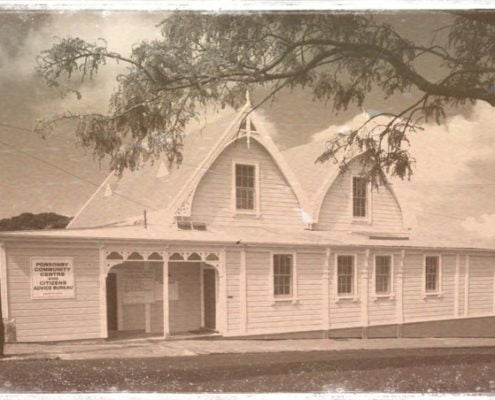 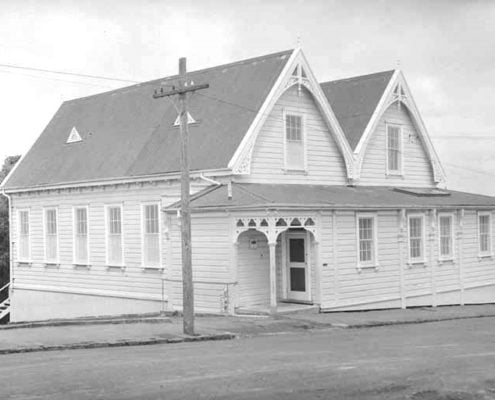 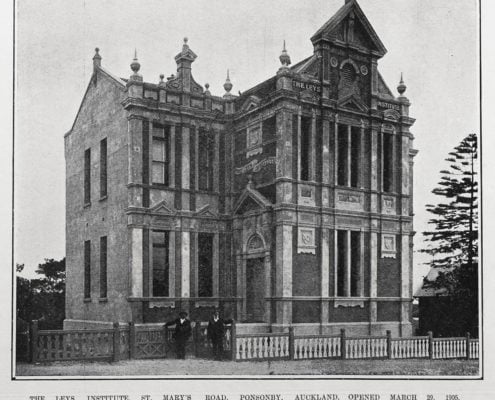 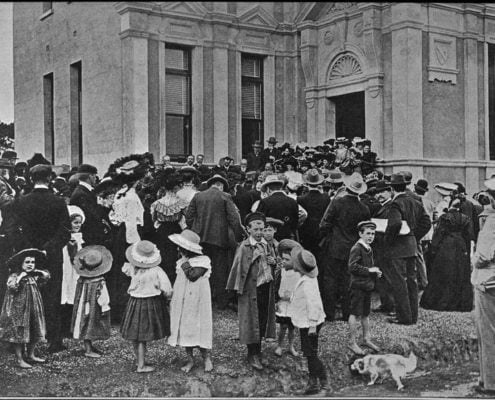 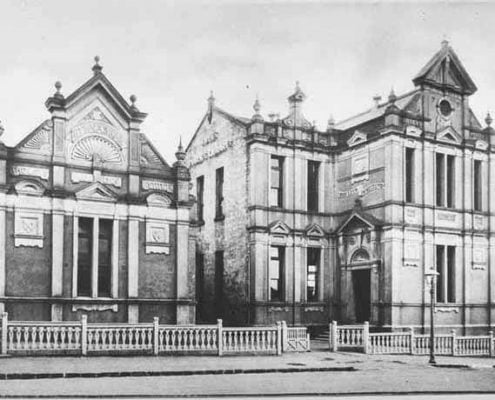 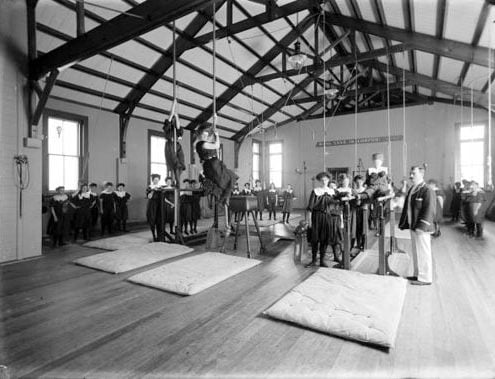 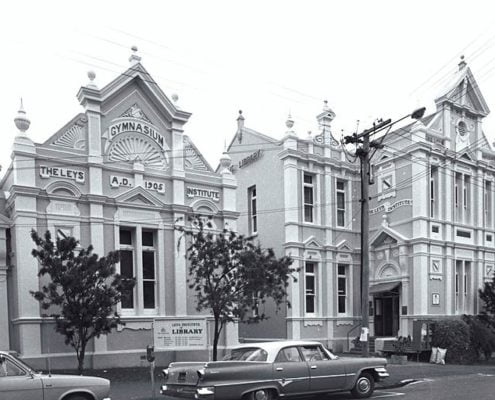 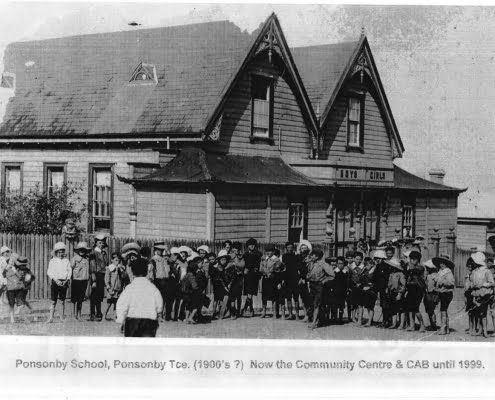 Built in 1897, Ponsonby Community Centre was initially an infant school, called the Ponsonby Side School.  It was purchased by Council in 1958 for use as a hall. This building was part of Ponsonby’ s first purpose-built public school erected on the opposite side of Ponsonby Terrace and the corner of Bayard Street. The main school building had been opened in 1879 and two years later this building was erected to house the infant department. ln 1898 it was moved to its present site and continued operating as an infant school Long after the closure of the main school opposite in 1932. ln 1970 the Ponsonby Community Centre, incorporating New Zealand’s first inter-cultural marae, was officially opened by Mr
Maclntyre, Minister of Maori and Island Affairs. It housed the country’s first Citizens Advice Bureau and provided a local venue for community groups and services including a budgeting advice service and the Plunket baby clinic. The King Cobras, a local Polynesian street gang, were also based in the building and they donated funds for much needed repairs as well as delivering meals on wheels to elderly people in the neighbourhood. ln l985 the country’s first Tongan pre-school was opened at the centre.

The various rooms at the Community Centre have been named after Ponsonby locals including seaman, watersider and trade unionist Johnny Mitchell (1907-1990), Flora McKenzie (1902-1982) Auckland’s most notorious Madam, and dancer Freda Stark. The
centre remains a well-used public facility.

The building of the harbour bridge in 1959, and subsequent motorway developments across St. Mary’s Bay were having devastating effects on the local community. Some 200 families, many of whom had been in Ponsonby since the 1860’s, were forced to move out, while better transport to outer suburbs allowed others to leave the inner city.  Short term renters began to take their place, with increasing numbers of rural Maori and pacific peoples from island states seeking work.

Peter Harwood had received a rotary fellowship to the United Kingdom and had seen the re-development after world war two.  He was impressed by the CAB movement that had begun.  Council appointed him to set up the country’s first CAB at Ponsonby Community Centre, and to report on what council could do to improve and better manage its urban renewal.

An embarrassing camp-out with Betty Wark and the street youth prompted council to house them in the Centre and subsequently arranged for the first halfway house in O’Neill street, further activating council’s role in community development.

Ponsonby has been full of the famous and infamous, plans and issues, community and controversy, but the spirit of the Centre and its workers was most poignantly recorded by Fred Ellis, ” a homeless person came in and I took him home!” In August 2012, the Ponsonby Community Centre took over the management of the Leys Institute Gymnasium Hall. The gymnasium hall played a key part in the local community, being a place in which recreational activities took place such as basketball, gymnastics and boxing.

In 1889 Thomson Leys was made a partner and in 1900 the managing director of the Brett Printing and Publishing Company, which incorporated the Auckland Star, the New Zealand Graphic and the New Zealand Farmer. Leys’s business interests also included the Napier Daily Telegraph, the Northern Roller Milling Company and the Auckland Gas Company.

Thomson Leys was involved in many civic and community affairs, particularly those relating to education. His outstanding contribution in this field was the establishment of the Leys Institute, a project initiated by a bequest from his brother, William, and generously endowed by Leys himself. The institute in Ponsonby was officially opened on 29 March 1905. It provided a free library, a reading room, a hall and a recreation room. In 1906 a gymnasium was added and in 1909 the first children’s library in Australasia was established. The founders’ aim was to promote learning and self-reliance in a non-sectarian environment for the youth of Auckland. As president and trustee Thomson Leys was the driving force behind the institute for 20 years. (https://www.teara.govt.nz/en/biographies/2l11/leys-thomson-wilson) Flora MacKenzie trained as a nurse and also became an accomplished dressmaker. For many years she ran a boutique, Ninette, in Vulcan Lane, which specialised in bridal gowns and was reputedly patronised by an affluent clientele which included cabinet ministers’ wives. She sketched her own creations, often in watercolours. (After her death, framed dress sketches by Flora MacKenzie were sold in an Auckland gallery, often, it was claimed, to former clients of her other business venture – the infamous Ring Terrace brothel in Ponsonby.)

Through her reputation as a Madam, Flora MacKenzie became an Auckland identity. Her home was legendary, prized for its art and antiques and rumoured to have a rotating bed upstairs with panoramic harbour views. She has been described as ‘a flamboyant, happy-go-lucky woman … who did not care a damn about what the so-called respectable people thought of her’. Freda Beatrice Stark (27 March 1910 – 19 March 1999) was a New Zealand dancer. During the Second World War, she was a famed dancer at Auckland’s Wintergarden cabaret and nightclub, and a favourite of American troops stationed there, where she earned the title “Fever of the Fleet.”

After leaving school, Stark worked as a clerical worker by day, and danced as “L’Etoile” during the evenings, and her repertoire included tap, high kicks, tumbles and hula. During the 1930s, she also learned classical ballet, as steps toward an advanced examination certificate at New Zealand’s Academy of Dance, which she acquired in the late thirties.

Inspired by a scene in an American movie, she danced painted in gold, clothed only in a G-string and feather headdress. The paint took five hours to apply and apparently kept her warm during her numerous performances. Freda, who revelled in the attention she received, was paid handsomely to appear scantily clad as the star attraction of the revue. American troops in Auckland for rest and recreation often booked the entire Wintergarden with band and floor show. The Gluepot tavern was Ponsonby’s most celebrated pub. Its name is thought to have been coined by local women whose husbands were routinely ‘stuck’ there drinking. In the 1970s it became a popular music venue, hosting well-known local bands such as Hello Sailor, Toy Love, and the Headless Chickens. Mick Jagger and Peter Garrett also played there. During his performance Garrett leapt high into the air, knocking a hole in the ceiling with his head. In the mid-1990s the Gluepot was closed and converted into shops and apartments. (https://www.teara.govt.nz/en/auckland-places/page-11)

To hire the Gluepot Room enquire via our Venue Hire page

Johnny was a seaman, watersider and  trade unionist based in Freemans Bay. He died in 1990.